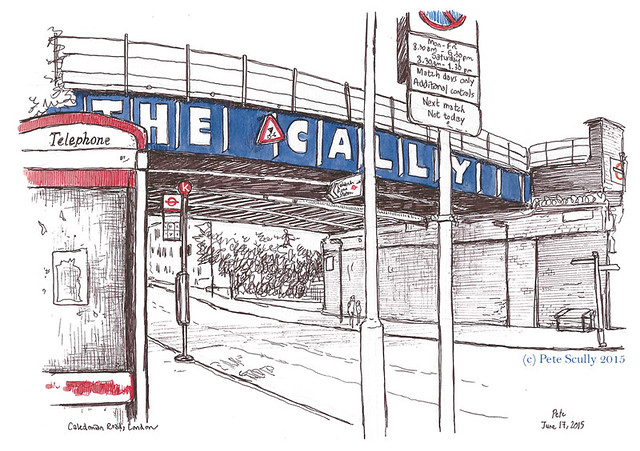 This is Caledonian Road in north London, more commonly known as The Cally. It’s been called the Cally for ever, but they felt it necessary to write it in big bold letters on the railway bridge in case people forgot. The Cally is not the area of London where I am from (I grew up in Burnt Oak), but is very much my Dad’s manor. He grew up around here, living up the near the Nag’s Head in Holloway. When I was a kid my dad would occasionally drive me over here when he had to visit his mates or my uncles, who still live locally. I remember him driving his Citroen full speed around narrow streets, shouting the ‘occasional’ swear word, his tools rattling around the back of the car. I was always scared of this area to be honest, it seemed a lot more dangerous than my neighbourhood…

The Hamas-controlled Gaza Strip, which Palestinians hope will one day become part of a future Palestinian state, is quickly sliding toward anarchy and chaos.

Since its violent takeover of the Gaza Strip in the summer of 2007, Hamas has maintained a tight grip on the area, home to some 1.7 million Palestinians. But now Hamas’s totalitarian rule over the Gaza Strip seems to be nearing its end, as the Islamist movement faces increased challenges from various militias and groups in the area.

Some of Hamas’s rivals belong to more radical terror groups such as the Islamic State and Al-Qaeda-affiliated militias created by salafi-jihadis inside the Gaza Strip. Others belong to the secular Fatah faction, whose members continue to dream of the day when they will be able to topple the Hamas regime and regain control over the Gaza Strip.

Myths of the Mirror

I saved this the first time I heard it – a fun piece by Rosemarie Urquico. Enjoy!

Find a girl who reads. You’ll know that she does because she will always have an unread book in her bag. She’s the one lovingly looking over the shelves in the bookstore, the one who quietly cries out when she finds the book she wants. You see the weird chick sniffing the pages of an old book in a second hand book shop? That’s the reader. They can never resist smelling the pages, especially when they are yellow.

She’s the girl reading while…

When and how did authentic information about the Shoah first become known? The question has been discussed in detail in my book The Terrible Secret and in Breaking the Silence (Laqueur and Richard Breitman). In the 30 years that have passed, additional information has become known. News about Hitler’s decision to destroy European Jewry and its implementation percolated out of the Nazi-occupied countries in various ways. The information came from individuals and groups including the Bund and Orthodox Jewish organizations. The central document was Gerhart Riegner’s cable sent to Washington on August 10, 1942. The general picture as presented in the 1980s need not be revised; specific issues have been clarified, others, on the contrary, are now less clear than before. My intention in the following essay is to point to some aspects that deserve further investigation.

The Leftists of the World have united with a fair number amongst their ranks and strewn widely within their leadership including well paid traitors in Israel itself. Their operations have led to the demolitions of Jewish residences across Judea and Samaria. Making matters worse, they have succeeded in removing any claims to Jerusalem by bending governments to make all babies born in any part of Jerusalem to be denied having the nation of their birth as Israel, even should they have been born in Western Jerusalem well inside the Green Line, the 1949 armistice line which it was Yasser Arafat’s wildest dream to alter that truce line and move it inexorably westward starting with Jerusalem and its surrounding area. Arafat knew that without Jerusalem, and particularly the Temple Mount, the Jews would have no claim to any of the lands known as Israel. This concept of a free zone in…

The BBC editorial guidelines – which of course apply to all content broadcast by the corporation, including commissioned programmes – include guidance on live output which has a sub-section titled ‘Offensive Comments’.

With that in mind, let us take a look at how the presenter of the BBC World News current affairs programme ‘Dateline London’ –

Dear Auntie Linda,  My parent are in their seventies.  I am their only child.  They are more than comfortable.  My husband and I have two children.  We’d like to move into a better school district but would really struggle to make the payments.  I’ve asked my parents but they don’t want to loan us the money for a down payment.  I am hurt, since I am their only child and heir.  Is this selfish of me?  Only Child

Dear Only, Without knowing the whole story, it’s hard to say.  Your parents may have every penny tied up.  Maybe, like me, they don’t loan what they can’t afford to gift.  A loan, not repaid, creates hard feelings.  It’s always better not to go in too deep.  Your parent’s money, however much or little it is, is theirs to do with as they please, not something you are entitled to.  They may…