~~Defender of Faith~Guardian of Truth~~

See on Scoop.it – UNITED CRUSADERS AGAINST ISLAMIFICATION OF THE WEST 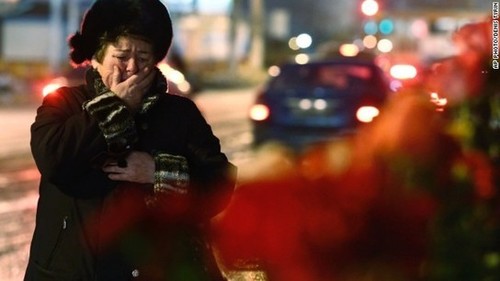 The terrorist attacks in Volgograd on December 29 and 30 are an ominous sign that the decision to hold the 2014 Winter Olympics in Sochi may lead to one of the greatest catastrophes in the history of the Olympics.

Between late December and early January St James’s Church, Piccadilly is hosting “Bethlehem Unwrapped”, a Christmas festival – produced in association with several radical NGOs – presenting a series of events and activities on the lives of Palestinians “living behind the wall”.  “Bethlehem Unwrapped” includes an especially duplicitous anti-Israel propaganda stunt: the erection of an 8 meter-tall “replica” of the Israeli “wall” that it claims (erroneously) “surrounds Bethlehem” and imposes hardships on the town’s inhabitants.

It is duplicitous, as Denis MacEoinargued recently in his open letter to St. James Church, because it doesn’t mention the dozens of security fences that have been built by other countries (such as India’s barrier in Kashmir and the “Peace Lines” in Northern Ireland), nor the fact that the barrier – built in response to waves of deadly Palestinian suicide bomb attacks – has saved countless lives.  It is…

Is this the bottom of the barrel at last?

I’m sure you will all be relieved to know that the situation at the Fukushima site is now so completely safe, nobody wants to work on cleaning it up, perhaps on the grounds that there’s no point in cleaning something up when it’s already clean.

Except that not even those on the dole will work there, because they’d rather take their chances – any chances – than work at Fukushima. Nobody believes the Tokyo government’s reassurances. And so Tepco is now hiring bounty hunters to search the streets and ditches for homeless people. Tepco is paying them $100 a mug – and the homeless victims themselves below the minimum wage – because only those on the verge of starvation will do it.

At the same time, opinion surveys consistently show that voters in Britain view Islam and the question of Muslim immigration as a top-ranked public concern. The British public, it seems, is increasingly worried about the establishment of a parallel Muslim society there.

But government efforts to push back against the Islamization of Britain have been halting and half-hearted.

What follows is a chronological review of some of the main stories involving the rise of Islam in Britain during 2013.

In August of 2012, artist Zaria Forman led an Arctic art expedition called Chasing the Light aboard the Wanderbird up the NW coast of Greenland.

The body of work—a series of large-scale pastel drawings on paper—sought to document climate change through art. As Zaria recalls on her website:

“My mother, Rena Bass Forman [a fine art photographer], had conceived the idea for the voyage, but sadly did not live to see it through. During the months of her illness her dedication to the expedition never wavered and I promised to carry out her final journey. In Greenland, I scattered her ashes amongst crackling ice diamonds, on the towering peak of one of earth’s oldest stones and under the green glow of northern lights. She is now a part of the landscape she loved so much. I am deeply grateful for the team of talented artists…

The article opens with amplification of Anelka’s reactions to the criticism levelled against him as a result of his having used what is widely regarded as a neo-Nazi salute during a live-televised football match the previous day.

“Nicolas Anelka says he is “neither racist nor anti-Semitic” after using his official Twitter account to defend a controversial goal celebration. […]

Anelka made the “quenelle” gesture – described as an inverted Nazi salute.

“Of course, I am neither racist nor anti-Semitic and I fully assume my gesture,” Anelka, 34, tweeted.

“The meaning of quenelle is anti-system. I do not know what religion has to do with this story.” “

The article then goes on to state: