BBC Radio 4 hosts an – often excellent – programme entitled “Analysis”. This week’s episode (July 1st, 2013) “Syria and the New Lines in the Sand”is on why, given five minutes of freedom, so much of the Arab world seems unable to refrain from tearing itself to pieces. Could it be the centuries of bitter sectarian enmities? Or the lack of any legacy of workable institutions after 500 years of Ottoman rule? Of course not; silly me.

This being the BBC, the answer, of course, is that it’s not their fault, it’s ours – or our grandfathers’ anyway. The evil Sykes-Picot (“villains” for the BBC) Agreement. The poshest man alive, Sir Sherard Cowper-Coles, oddly forgiven for having been Ambassador to Israel, is wheeled on to give gravitas to the argument that ‘It’s All Our Fault’. 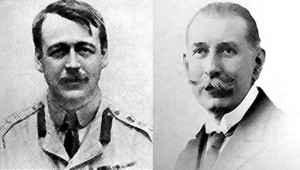